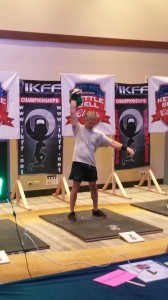 True kettlebell lifting is more about just exercising, there is an actual sport behind it, one which is fairly new to the U.S. but is very popular in Russia (of course) and former Soviet block countries. Dwight was Best Overall Lifter in the 24k Class  for the Biathlon as well as earning Level 2 Ranking. I made Level 1 in my class in the Biathlon as well as earning CMS in the 5 minute Snatch competition with 106 reps

In the Biathlon the jerks are performed first with each rep counting as 1 rep for men. For women total points are the average of the number of reps on each arm. The lifter has 10 minutes to get as many reps as possible. You may stop before the time limit is up and all reps count. After an 1 hour rest the snatch set is done. The total points are the average of each arm. It’s also done for 10 minutes, but you can stop any time.

In the Biathlon you must use the same size bells for both lifts.

Jerk Rules – the bell may not  be dropped out of rack. Rest is in rack position or overhead. The bells may not rest on the shoulders. Women may not touch the bell with the free hand at any time. Elbows must be locked out during the 2nd knee bend then the knees lockout or it is a no count. You must return to rack position and pause before beginning the next rep.

Snatch Rules – You can only rest overhead. The bell may not be brought into rack position. You may not touch the bell with the free hand. The elbow must be locked out overhead and the knees must be straight or it’s a no count.

In Long Cycle the rules are the same as the jerk with the addition of there must be a clear break between the clean and the jerk.

Each participant is ranked based on reps, the weight of the bell(s) and their body weight. There are huge spreadsheets with rank tables so I’m not going to post any of them here but you can visit http://ikff.net to see the spreadsheet.

Dwight also competed with the 24k bells but in the 100k + weight class so he had to get 185 points. While he didn’t get that number he was still best overall in the 24k category!

I also competed in the 5 minute snatch even and hit 106 reps in 5 minutes which was more than enough to qualify for CMS in that event. However, when I went back & looked at video of my snatch set, I was going so fast I wasn’t lockout out the elbow or fixating the arm and technically a lot of my reps shouldn’t have counted. The judge didn’t call me on them though… I will re-do it at the competition we’ll be holding at IronBody Fitness on July 26th as well as doing the Biathlon again.

A shout out to Rock Cox and the Chicago Kettlebell Club crew for a great event. Very professional!