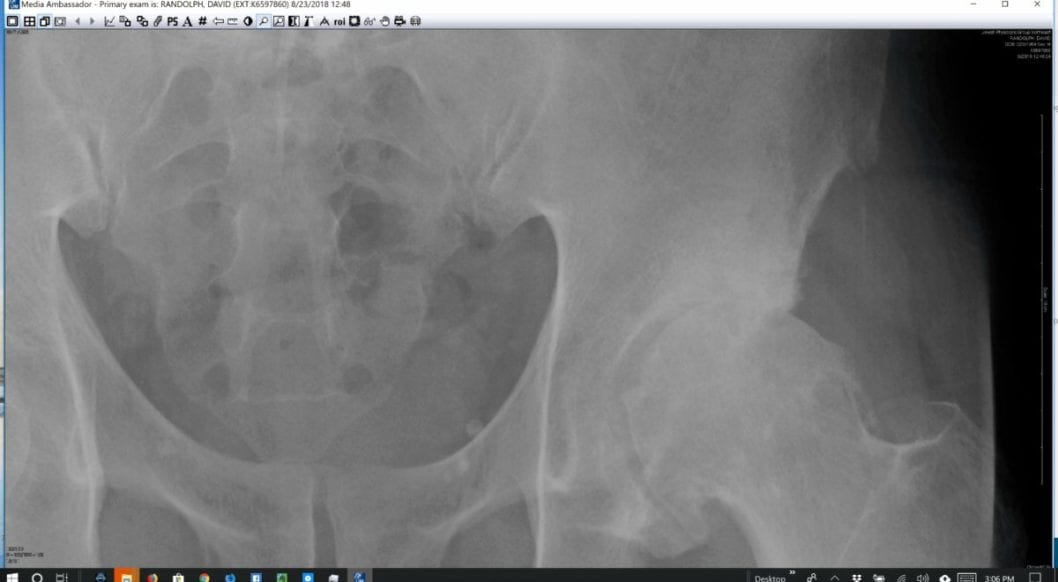 On 11/21/18, the day before Thanksgiving, I’m scheduled for a total hip replacement. They will be making an incision on the front of the left hip, separating the muscles (no cutting) and exposing the joint capsule. They will then cut open the capsule to get access to the head of the femur and the socket.

Once they are in the head of the femur will be cut, and the socket will be cleaned up. They will put in an artificial socket and drive a piece of metal into the femur (thigh bone) which has an artificial head on it which matches up with the socket. Once everything is back in place, they will sew up the joint capsule and the cut they made in the skin.

Once I come out from under the anesthesia, I will get dressed and go to a physical therapy session where they will evaluate me and make sure I can walk. After the PT has finished their assessment I will get either a cane or a walker to take home. I’ll be laid up for several days, but I’m supposed to get up every hour to walk around. They’ve also given me some exercises to do to speed recovery.

So how did I get here? There are several things that could have contributed to the degeneration of the joint. Mostly I was out of alignment, just like a car. The left side of my pelvis is tipped forward (anterior pelvic tilt) and, it’s also rotated toward the right. The makes the femur externally rotate (turned to the left). All of that causes the head to become uncentered in the socket. Over time it kind of gets stuck there, especially when lifting weights. The lifting causes the muscles to tighten up and locks up the femur even more.

With the misalignment, the body starts compensating in other areas otherwise, I’d be walking in circles. The lack of centration in the hip capsule also causes the labrum to break down and the bone to wear out. I have divots on the head of the femur and no space between it and the bone that makes up the socket.

Looking back I can see the signs, some burning in the front of the hip back around 2000 or so that went away, shifting to the right when squatting and eventually doing swings, deadlifts, and other lower body exercises.

I didn’t understand what was going on until about 2012 when someone took pictures of me squatting with two 32 kilo (70lb) bells; I was shifted to the right. I went to Indy to see a top notch PT with whom I had studied under in the past. He did a full assessment and told me about the tilt and rotation. He gave me some things to do and told me to stop doing certain lifts until I got realigned. I did them for a short time but they were boring and, I just wanted to lift. So I stopped doing the correctives and, six years later, here we are. It’s been getting worse over the last year and, there are some days I can barely walk. Alleve helps the pain but, that’s about it

I had X-rays taken in September and, I’m bone-on-bone (see the photo at the top of this article) along with bones spurs. I met with the surgeon in October and, we scheduled it for the day before Thanksgiving, so I wouldn’t have to shut the gym for long.

I had to stop taking all supplements two weeks prior to the surgery and, I had to stop the Alleve seven days before. Today I had to start using an anti-bacterial ointment in my nose and tomorrow I start taking showers with an anti-bacterial/anti-microbial wash. Both of those are to make sure I don’t pick up and infection (MRSA) which could cause serious complications.

I’m supposed to start taking Ensure and Glycerna in addition to meals the days before, but that stuff is loaded with soy, High fructose corn syrup and a lot of other crap. The Ensure also has a lot of dairy in it but, I’m sensitive to casein, the main protein in dairy, which is another reason I can’t use it. The idea is to get a lot of protein and carbs to help speed recovery. Instead, I will use bone broth and collagen powder.

Since the procedure will be done out-patient, I will be home sometime Wednesday afternoon and will be laid out on the couch all day Thanksgiving day. I plan on getting back into the gym the following Monday, but I will only be able to direct things. I can’t pick up anything more than about ten pounds for several weeks and no twisting either. That will be the toughest part; refraining from picking up things, moving around and demonstrating movements.

I will write about the surgery and recovery over the next several months to keep you informed.